Euro Adventure: All about Makhachkala and will you come out alive?

Continuing on my series of articles on possible European destinations for Saints, my focus today is on Anzhi Makhachkala.  Many of you have probably heard of them – they are the team owned by a Russian billionaire, Suleyman Kerimov who has funded the purchase of Samuel Eto, brought manager Guus Hiddink to the club, along with other superstars like Roberto Carlos, Yuri Zhirkov, and Christopher Samba and is intending to spend upwards of 200 million Euro’s on infrastructure to try and bring the club into the 21st century.

Makhachkala is a city of 500,000 people, on the banks of the Caspian Sea, in southern Russia.  The summer sun produces sunny, dry days with temperatures in the high 30’s.  An ideal place for a summer vacation then? 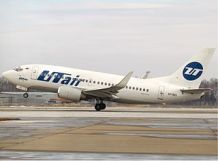 1) Getting there – not too bad, but you either need to survive a 40 hour train journey from Moscow, or risk a 3 hour flight on Russian airline UTair (incidentally, they don’t have a hugely bad safety record compared to other Russian airlines, and fly relatively new Boeing 737’s on the Moscow – Makhachkala route twice a day).  We’ll cover this more a little later.

2) Visa’s – bureaucratic at best, but as long as you have 100GBP saved up, and a week to wait, not impossible.

3) Very few – Makhachkala is as far off the tourist trail as you can realistically get.  I found one you can book online – will come to that later… more important parts first.

Firstly, I want to say I came into this with an open mind.  I have traveled fairly extensively in Asia, and live in a country which the UK Foreign office has travel advisory’s for.  Indeed, I have friends living in Southern Mindanao which the FCO advises against all travel too.  Quite frankly, it’s a load of ****.  I feel safer here in Philippines than I ever felt living in Scotland.  There is a risk of getting kidnapped only if you go to the far flung mountain areas in the south which are controlled by the Islamic forces and declare your there to reclaim the land for Catholics.  Otherwise, your perfectly safe.

So, when I read on the FCO website about travel to Dagastan saying ‘advise against ALL travel’ I am skeptical.  This is what they have to say:

“We advise against all travel to the North Caucasus republics of Chechnya, Ingushetia and Dagestan. If you intend to travel there you must have the correct documents including the right visa for the purpose of your visit, and meet registration requirements. If you travel to these parts of Russia despite this advice, you are taking a serious risk, and must accept that the ability of the FCO and the British Embassy in Moscow to help in the case of an emergency is severely limited.”

But is it really as bad as they make out…?  Well, after 3 hours of searching the internet I am yet to find anyone, other than a fluent Russian speaking Australian on Lonely Planet, who even vaguely suggests traveling there might be ok!  A collection of articles for you to read:

BBC advice. The Guardian on the rise of Anzhi Makhachkala and how foreigners are good kidnap targets.  Another BBC article on the dangers of living in Makhachkala.  Dagastan named on the 10 most dangerous places to visit.

So, what’s the reality?  Well, if you go there its not going to be like going to Spain, or France.  Use common sense.  It seems like most the violence is aimed against politicians and police, and places selling alcohol (yeah, I don’t think we’re going get a good alcohol fueled party like Vaasa here!).  Look like a tourist with a lot of money, or do anything that offends the Islamic population and you’ll make yourself a target.

Still want to go?  Great, on with the show… how do you get there?

Its not actually too bad.  Easiest way I found was flying Lufthansa from Edinburgh to Moscow Vnukovo Airport.  Cheapest ticket around the time of the possible tie was 272GBP – not sure if that includes taxes.  From Moscow its either a 3 hour flight south on UTAIR, or a 40 hour train journey.  As the flight costs about the same as the train, I didn’t even bother with that timetable (and there is reports that bribes need to be paid for foreigners to get into the region when traveling by train, so stick to the air).

The UTAir flight is listed as from 9190 rubles.  A quick conversion puts this at 183GBP return.  As I noted above, UT is flying Boeing 737’s on this route and has a decent safety record compared to some other Russian Airlines.  The only incident I can find for them on the Boeing’s is from 2010 when they overshot the runway in Makhachkala.  Given the risk of terrorists shooting you, the Air safety should be the least of your worries!

Onto the next issue – Visa’s.  Russia is notoriously difficult for visas.  Things have gotten better over the years, and applications can be made by post, or through the VFS visa center in Edinburgh (Russia Visa Application Centre in Edinburgh, 16 Forth Street, Edinburgh, EH1 3LH).  You can get a 30 day tourist visa for 50GBP + 23.40GBP application fee, which takes about 7 days to get.  The requirements aren’t too bad, but include a ‘Tourist Voucher’.  Technically you can get this free of charge when booking your hotel (will come to that soon), but if your doing things ‘on the fly’, a website like this will charge you 20GBP for the document.

Ok, so you got your flights booked, and your visa done.  Hotels. 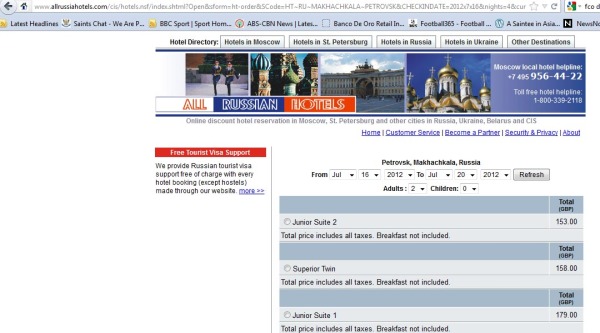 Er, not really too much choice as far as I can see.  There is a number of websites listing hotels in Makhachkala, but most contain no info on the actual hotel (most don’t even have an address listed, let alone a website or telephone number!).  I did find this site which has a couple of hotels listed that you can book online for.  The hotel Petrovsk in Makhachkala had the most info listed and a few photos showing what looked a very dated room, from 153GBP a night in July.  Whether anyone would ever reply to the inquiry is anyone’s guess.  As a small bonus the site confirms they will provide the Tourist Voucher needed to apply for your visa free of charge (so thats 20GBP saved…)

One last word of warning.  As the FCO advises against travel to the area, almost all travel insurance packages WILL NOT cover you.  You will need a more global company that offers specialist insurance packages.  WorldNomad is one of these.

All in all it would work out cheaper than Aktobe, but will be much much more dangerous.  If your up for an adventure and don’t mind a little bit of risk, it could be a fun and unique journey.  If you have a family and you like your package holidays I would avoid like the plague!

One thought on “Euro Adventure: All about Makhachkala and will you come out alive?”