It’s that time of year again, when clubs up and down the country report their financial results for the year ending May 31, 2013.  While the accounts will be publicly available from Companies House in due course, it usually takes a while for them to show up.    Thankfully a kind soul has forwarded me this years account for a quick analysis.

The headline figure is unfortunately that Saints have made another small loss (which has been the trend over the last couple of years).  However, despite a playing budget which was inflated with wages for those such as Vine, Beattie and co, which many fans commented on last season, and the expense of a charter flight to Turkey and back, the cost base is only slightly increased.  It is also interesting to note that the ‘cost’ of providing free tickets to under 12’s has had very little effect on the turnover.

In the chairman’s report, below, the lost turnover is blamed on 1) attendances due to the lack of 3pm kick-offs, 2) tv money being reduced (as the SPL paid 1m to the SFL to keep them happy) 3) a lack of cup runs and 4) the economic downturn which has affected non football revenue.

2012/2013 proved to be both a successful and exciting season for the Club.

Steve Lomas and Tommy Wright continued the good work which they had started following upon their appointment in the earlier part of the previous season and having qualified for Europe, the team acquitted itself well against a quality Turkish side with a footballing budget substantially higher than ours.

The team fed off this success and not only finished in the top six once more, but finished third, their highest position since 1999 and qualified yet again for Europe.

Progress in the domestic cup competitions remains very important to the Club but unfortunately our ventures in the Scottish Cup and League Cup last season were less successful and we were eliminated by St Mirren and Celtic respectively.
It is testament to the abilities and professionalism of Management, Backroom Staff and Players alike that the season proved to be one that would be remembered for a long time.

Profitable trading continues to be a challenge and once again it has eluded us this year.

Despite the welcome contributions from a ready and loyal band of sponsors and supporters, the on-going economic recession once more provided a negative impact on our Accounts.

However, the income generated from the excellent facilities at the ground is vital to the financial well being of the Club.
We are continually striving to ensure that the facilities and services provided at the ground are second to none. We are a seven day a week business providing a range of opportunities to use the stadium – our public restaurant, private venue hire, match day hospitality and our synthetic playing surface hire being just some of them – and I would urge all shareholders, supporters and those in the Business Community to support these aspects of our business.

We have also sought to improve upon the communication between the Club and our loyal supporters, particularly through social media.

A loss of £192,767 is being reported in these financial statements and although we are addressing the need for increased income whilst reducing costs in all areas of our seven day a week business, further work remains to be done.

Despite the on-field success, this did not commute to getting more people through the turnstiles. The European adventure, though great for the Club and supporters alike, proved expensive and the impact of televising games, though producing welcome revenue, resulted in many matches being played out with the traditional 3pm Saturday slot and this had a negative impact on both crowds and hospitality revenue.

Chris Charalambous, our Chief Executive, has been tasked with looking after the non-football side of the business, with a particular remit to increase revenue, whilst cutting costs.

Progress has been made in reducing the wage bill for the football operation but further work requires to be done as it must get closer to our level of income which is restricted in nature.

Reduced income from football’s governing bodies, reduced TV income and an average crowd of approximately 3,700 means that we simply cannot continue to outlay large salaries and bonuses to players where there is no income to meet these payments.

The Club remains thankful for its loyal core support in the stands and in the business community.

The Club remains active in looking to introduce new and innovative ways of increasing turnover whilst reducing costs.
Our initiative of allowing supporters aged 12 and under into matches free of charge remains vital to the future well being of the Club and along with other initiatives was formally recognised by us winning the SPL’s Family Champions Award.

On the footballing side, Alistair Stevenson has returned to the Club and has made a solid start to the task of bringing quality young players to McDiarmid Park and this strategy must form a key foundation of the Club going forward.
As ever, the challenge of remaining in Scotland’s top flight will remain a priority.

I am confident that this will be achieved and with the nucleus of last year’s team still with us, it may be that we achieve some success in the Cup Competitions.

So, lets have a deeper look into the accounts, starting with the P&L. 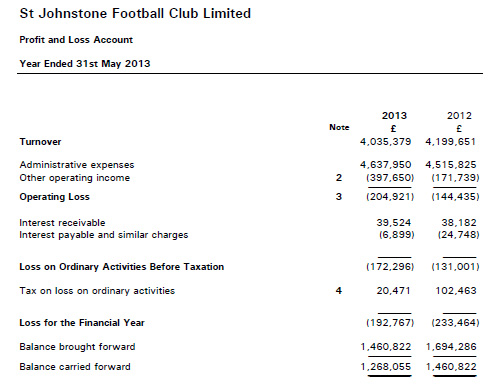 Starting with turnover,  it has decreased by 150k, down to just above the 4m mark.  However, there is 397k of ‘other income’ not included in this which is up 226k.    When added into the turnover, it actually means income was up by around 50,000 pounds.

We’ll say that again shall we… Income is UP (as in increased Mr Doncaster), over the previous 12 months.  The directors deserve great credit for achieving this, even after removing the income of all under 12’s with their free ticket policy.

Unfortunately it is not all good news, as the costs have also increased.   Reason’s for this will be the larger than usual playing budget demanded by Steve Lomas, in addition to the cost of a charter flight to Turkey and back.  As clearly noted in the chairman’s statement, the intention is to cut the costs this season as can clearly be seen by the transfer business this summer.

This all equates, after all the usual interest and tax charges are equated of a net loss of 192k pound – about 40k less than 2012. 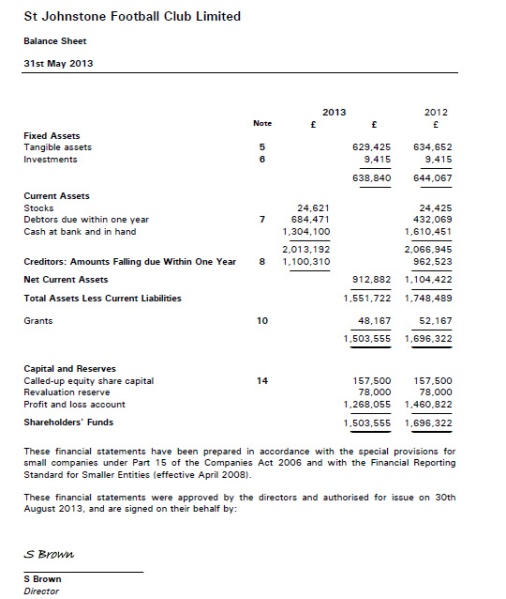 As you can see, it is very similar to the 2012 figures.  Both debtors (that is money owed to St.Johnstone) and creditors (that is money that we owe to someone) have slightly increased.  Debtors is slightly higher than creditors, which shows in the on hand cash balance of 1.3m, down 300k from last year (the ‘missing’ 100k is accounted for in the difference between what we owe and what we are owed).

Moving onto the first line, assets are valued at 600k, very slightly different to 2012 (due to depreciation).  A very quick accounting 101 is that a balance sheet comprises what you own (the assets), plus what your owed (the debtors) minus what you owe (the creditors), to give you the company value, which, here is currently 1.5m.  More importantly to me is the Net current assets (I did an article of this figure last year on TSFM – read here) figure which effectively shows how much liquid funds you have on hand.  When this gets negative you have issues.   In Saints case it is a very healthy positive figure of just over 900k.

When I read the St.Johnstone accounts for the first time last season I was surprised at how low the assets were valued, and this year, there is a lengthy note from the directors about them.  Let’s first look at how the 600k figure for assets is comprised: 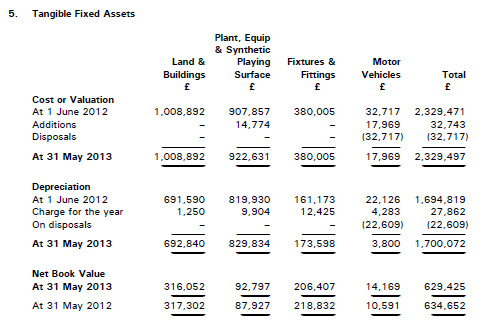 The figure that jumps out to me is the value of Land and buildings of just over 300k.  Before you get amazed at how low a figure this is, Steve Brown has helpfully explained it immediately below the assets table, as follows:

What we have here is an estimated value (they have made no reference to an official report, so I assume this was done unofficially) of 3.1m.  I have highlighted the appropriate figures, and the line explaining that the directors don’t feel its responsible to include this revaluation in the accounts.

Maybe this is something the whole of Scottish football could learn from.  It was the 124m ‘valuation’ of Ibrox that led to Rangers becoming extinct last year.  Hearts are also now feeling the pain of unrealistic land valuations and Aberdeen are saddled with large debt attributed to a high stadium valuation.

Thankfully Stevie is following the lead of his father, with realistic accounting rather than going for headline figures of artificially ‘creating’ profit of 3m +

Finally, I read media reports yesterday that the accounts would have been even worse had they not received 50k for Steve Lomas from Millwall.  However, the accounts are clear that this was a post balance sheet event, and thus, we’ll see the 50k appear this time next season.

All in all a decent set of accounts.  There is encouragement that despite all that went on in Scottish football last year, and all the threats of Armageddon, that revenue is slightly increased.  While costs have increased this is of little surprise to fans who questioned the amount of high salaried players who were signed last season.  Tommy Wright seems to have reduced the playing budget significantly, which, fingers crossed, should lead to a profit this time next season.